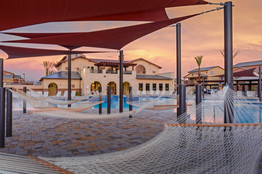 Some of the millions of students heading back to college—and their parents—are finding a pleasant surprise: Landlords nationwide are cutting rents because of an oversupply of student housing in college towns. Not so in Riverside, but a record 51,000 college bed are expected to be delivered in college towns nationwide this Fall. Read More.

Colleges Are In The Housing Business at least that’s how it looks to Ohio University’s Richard Vedder.

Many colleges, he notes, are using federal largess to finance Hilton-like dorms and Club Med amenities. Stanford offers more classes in yoga than Shakespeare. A warning to parents whose kids sign up for “Core Training”: The course isn’t a rigorous study of the classics, but rather involves rigorous exercise to strengthen the glutes and abs.

Or consider Princeton, which recently built a resplendent $136 million student residence with leaded glass windows and a cavernous oak dining hall (paid for in part with a $30 million tax-deductible donation by Hewlett-Packard CEO Meg Whitman). The dorm’s cost approached $300,000 per bed.

It’s no wonder students are willing to pay $500 for half of a living room and eat ramen noodles while they pile up debt in the worst job market since the Great Depression.