The first permanent air quality monitor near a Southern California freeway has detected elevated pollution levels, a finding that will increase pressure on state and local officials to address health risks facing nearly 1 million people in the region living near busy transportation corridors.

Readings from a new monitoring station 30 feet from Interstate 5 in Anaheim show concentrations of nitrogen dioxide air pollution that are 60% higher than the region as a whole, the South Coast Air Quality Management District said.

Monitoring instruments have typically been placed away from major roads and pollution sources because they are intended to gauge regional air quality. Now, the EPA is ordering local regulators to measure and factor in the dirtier air being breathed by tens of millions of people across the country who live within a few hundred feet of a major road.

The data will be valuable to local planning officials, who must consider the environmental impacts of siting developments near traffic, and give more leverage to clean air advocates.

Environmentalists and community activists, who have pressed for near-road monitors for years, vowed to use the information to fight freeway expansion projects, push for steeper emissions cuts and oppose development near freeways, where less expensive real estate is often sought for schools and affordable housing. 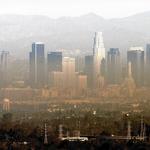 “For those of us that think that a lot of attention needs to be paid to people that live near the freeway, this is very powerful evidence that we’re right,” said David Pettit, an attorney for the Natural Resources Defense Council.

The higher pollution levels did not surprise health experts. For almost 20 years scientists have warned that people who live within a few blocks of major roadsand highways are at higher risk of a variety of health problems because they breathe more polluted air.

But the results validate the concerns of many Southern Californians who live, work and go to school near heavy traffic.

Many of us have been exposed to this for years and it’s a normal way of life for us and that’s sad.– Thinh Luong, teacher at Mark Keppel High School

“Many of us have been exposed to this for years and it’s a normal way of life for us and that’s sad,” said Thinh Luong, who teaches social science at Mark Keppel High School in a classroom that sits about 100 feet from the 10 Freeway in Alhambra. “It’s about time they start to take our quality of life seriously.”

Starting this year, air quality officials in more than 100 big cities across the country are required to install monitoring devices near major roads and use them to determine whether the air meets federal health standards for nitrogen dioxide, carbon monoxide and fine particle pollution.

South Coast air regulators said the pollution levels found near traffic in Anaheim were not high enough to violate federal air quality standards for nitrogen dioxide. But the smog-forming gas is an indicator of other, more worrisome pollutants that are not regulated, including ultrafine particles that can deposit deep in the lungs and enter the bloodstream and brain.

Air pollution has dropped sharply in recent decades because of tighter emissions standards, but higher levels remain in neighborhoods close to freeways, where the mixture of harmful combustion gases and particles from diesel trucks and automobile tailpipes can raise pollution concentrations five to 10 times higher than surrounding areas.

“This has big costs,” said Rob McConnell, a professor of preventive medicine at USC whose research has attributed 8% of childhood asthma cases in Los Angeles County to living near a major road, with each case costing families an estimated $4,000 a year in healthcare and other expenses.

The Anaheim air monitoring station is the first of four required in the South Coast basin. It is one of 36 stations that measure air pollution levels in the nation’s smoggiest region, which includes the most populated areas of Los Angeles, Orange, Riverside and San Bernardino counties.

The monitor is near Disneyland, downwind of a congested stretch of freeway where an average of 272,000 vehicles pass by each day.

South Coast air district officials say they have little power to reduce exposure to pollution from traffic because only state and federal regulators have jurisdiction over vehicle emissions. The district can, however, provide incentive funds for cleaner engines and pay for filtration systems for schools.

The California Air Resources Board advises against building homes, schools, playgrounds, day care centers and medical facilities within 500 feet of freeways and high-traffic roads. But those guidelines are voluntary because local officials control land-use decisions.

Government officials must balance air quality concerns with the need to build homes in low-income communities, said Cabildo, who is president of the East LA Community Corp., a nonprofit advocacy group and affordable housing developer. “I don’t think that we should have a knee-jerk reaction to this data and stop all development near freeways.”

“If we build a lot of dense housing along freeways now, knowing what we do, we’re likely to make a lot of people sick,” he said. “People will look back 50 years from now and wonder: What was wrong with us?”