On a recent weekday morning, a crew was busy sprucing up the exterior of Koonal Parmar’s one-story house in West Oakland. They trimmed trees, pressure-washed the wood siding and touched up his paint job. 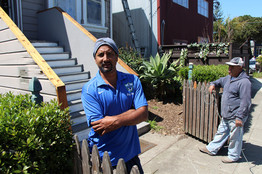 Mr. Parmar welcomes the changes in his neighborhood.

Mr. Parmar didn’t pay a dime for all this. The upgrades were compliments of REO Homes LLC, an investment firm that owns several houses on Mr. Parmar’s block. In addition to helping homeowners upgrade their homes, REO has mended fences and planted hundreds of trees along city streets.

“The neighborhood was badly in need of capital, to maintain, beautify and restore it,” said REO founder Neill Sullivan, while driving his hybrid sedan through the streets of West Oakland.

The company’s motives aren’t altruistic. They are part of a broader strategy designed to upgrade the neighborhood to attract higher-income residents who, in turn, will help boost properties’ values.

In past housing recoveries, investors purchased foreclosed homes and often tried to flip them for a quick profit. But investors with a different approach have plunged into the housing market this time. They have assembled billions of dollars to acquire homes and upgrade them. Their aim is to gentrify communities and profit later when rents and property values rise. 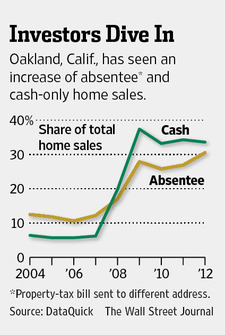 The gentrification of low- and middle-income urban neighborhoods is nothing new. But economists and scholars say the current process is moving faster than in the past, which can be unsettling to people who lost their homes or who are being displaced by fast-rising rental rates and home prices.

“It can take generations for neighborhoods to change, but investors have the potential to accelerate the process, especially because they may have the cash on hand to purchase lots of homes at once, even in tight credit markets,” said Ingrid Gould Ellen, co-director of New York University’s Furman Center for Real Estate and Urban Policy.

These efforts aren’t occurring everywhere. In cities far away from vibrant employment centers or where crime and unemployment are high, vast tracts of housing remain abandoned. But in working-class communities in or near Washington, New York, Boston, Los Angeles and San Francisco—where employment is relatively strong and housing costs are high—big investors have become an active part of the housing market.

Virginia Tech professor Derek Hyra, who is writing a book about the gentrification of Washington’s historically black, largely low-income Shaw/U Street neighborhood, said while the gentrification process has been moving slowly for decades, it sped up in late 2009 and early 2010, due partially to rising foreclosures. “You see doggy day-cares popping up in the U Street area, which is sort of unbelievable,” Mr. Hyra said.

Real-estate firms say they need to spiff up neighborhoods to make their investments pay off. The MACK Cos., is a rental landlord that operates in the Chicago market and owns about 400 homes and manages about 1,400 homes owned by larger investment firms. Six months ago, it paid $165,000 for a house in Midlothian, Ill., near a country club, which sat on a street filled with potholes. 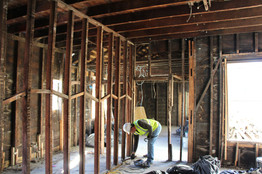 A worker renovates one of REO’s homes.

After local officials failed to repair the road, MACK decided to spend $20,000 to repave the block in front of the home, which is expected to rent for about $3,300 to $3,500 per month. Jim McClelland, MACK’s chief executive, said the company buys most of its homes, which are all bank-owned foreclosures, for around $50,000. It then spends an average of $43,000 on interior renovations for each house, and an average of $9,700 on exterior improvements, including grooming driveways and planting trees in medians on the street.

“If your play is for long-term appreciation, versus just flipping the houses, wouldn’t you want to improve the properties and make the area more desirable?” Mr. McClelland asked. “It creates a look of curb appeal. It’s good for business.”

Some veteran landlords disagree. “Renters can only afford to pay up to a certain amount. Spending extra money to not only improve the house, but also the neighborhood wouldn’t result in enough of a rent increase to be cost-justifiable,” said Michael Meyer, chairman of TwinRock Partners, a real-estate firm in Newport Beach, Calif., that owns roughly 250 single-family rental homes in Southern California and Las Vegas. 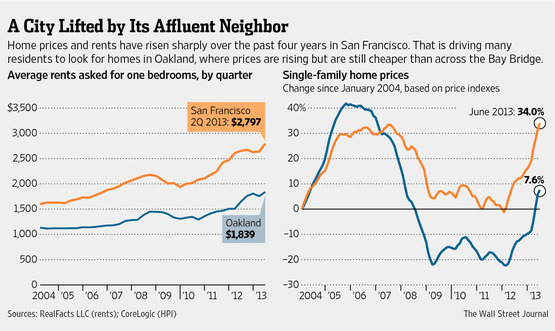 Because homes prices are rising faster than rents, Mr. Meyer said he is only getting a 5% to 6% annual return on his most recent purchases. Spending more to improve the neighborhood wouldn’t be “economically viable,” he said.

Few places highlight how investors are hastening gentrification as well as Oakland, a port city on the San Francisco Bay with a long history of labor and political activism. The city’s working-class black population swelled after World War II as families relocated from the South to seek work in Oakland’s shipbuilding and food-processing industries.

Over the years, Oakland has been the scene of numerous dockworker strikes and in 1966 became home to the Black Panther Party, a black militant organization. Crime skyrocketed during the crack-cocaine epidemic of the 1980s, and the city’s reputation suffered despite its proximity to some of the wealthiest neighborhoods in the country.

As crime has fallen in recent years a technology industry boom has lifted the Bay Area economy, and real-estate brokers have positioned Oakland as a more affordable option to San Francisco, a few miles away. The average asking rent for a one-bedroom apartment in San Francisco rose 39.4% to $2,797 between the second quarter of 2009 and the second quarter of 2013, according to RealFacts LLC, a real-estate data provider. Oakland’s rental market is rising, but it remains comparatively cheap. Over the same period, one-bedroom asking rents rose 31.2%, to $1,839 from $1,402.

A study conducted last year by the Urban Strategies Council, an advocacy organization based in Oakland, found that between 2007 and 2011, 10,508 homes in the city went through foreclosure, and 42% were acquired by investors.

One of the biggest investors to seize on the opportunity was Mr. Sullivan’s REO Homes. With the help of an early investment from Thomas Steyer, the founder of San Francisco-based hedge-fund firm Farallon Capital Management LLC, REO has acquired more than 200 homes in Oakland since REO was founded in 2008. Most are in West Oakland, known for its stately Victorian homes and located just one stop from San Francisco on the local commuter rail line.

Mr. Parmar welcomes the investor-driven gentrification. The 39-year-old musician and youth soccer coach purchased his home in West Oakland for $302,000 in 2004, when the neighborhood was, as he said, “very marginal.”

Mr. Parmar said that since investors started buying up blighted properties in the neighborhood, drug dealers have stopped selling on a corner near his house, neighbors have started taking better care of their houses’ appearances, local residents have set up a neighborhood watch group on Facebook and a once-dangerous park nearby has reopened for weekly youth soccer practices and softball games.

He also points to new, trendy restaurants and a brewery that have opened recently nearby, and said that the neighborhood is getting younger and more ethnically diverse as more-affluent white and Asian renters move in. “This neighborhood has turned around 180 degrees,” said Mr. Parmar. “The people who were living here for 30 years were just letting the neighborhood rot.”

That isn’t the way many longtime residents see it. A few blocks away, Jo Anne Stamps, 61, a retired administrative assistant, lives with her 96-year-old mother in a home that has been in her family for more than 40 years. She said the new renters who have come in over the past few years keep to themselves and don’t participate in neighborhood traditions like the annual block party. “When mom moved in, people were more friendly,” Ms. Stamps said. “Everybody knew everybody. It made me feel safer.”

The changes in the community also worry Oakland city officials. They are advancing various initiatives designed to slow down investor purchases and give owner-occupiers a chance to buy foreclosed properties before investors see them as part of a federally funded “First Look” program.

“I’m not interested in finding housing for San Franciscans who can no longer afford San Francisco. I’m interested in helping people here in Oakland,” said Desley Brooks, the council member who sponsored city legislation requiring investors to record their property holdings in a city registry to slow down purchases. “There are people here who have lived here their whole lives who can no longer afford Oakland.”

Write to Robbie Whelan at robbie.whelan@wsj.com

A version of this article appeared August 14, 2013, on page A1 in the U.S. edition of The Wall Street Journal, with the headline: Companies Spruce Up Neighborhoods, Putting Gentrification in Overdrive.