Now here’s an idea that’s gotten excellent results in a Florida community. Just imagine what we could do in Riverside if we added this feature to our 311 app. 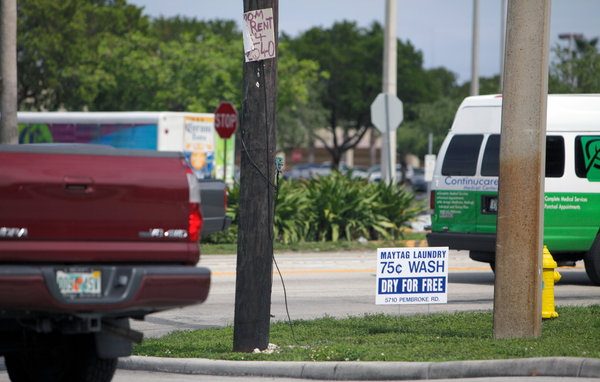 In Florida, they are as much a part of the landscape as palm trees and oceanfront hotels: plastic signs cluttering roadsides with messages like “We Buy Houses!” “Junk Cars!” and “Avoid Foreclosure!”

Catherine Regal, above, a real estate agent, says it is unfair that politicians can put up signs but businesses cannot. 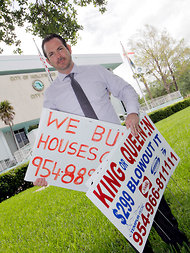 Mayor Peter Bober of Hollywood, left, is pleased with the results of the robocalling.

But now, worried about the impact on tourism and the state’s natural beauty, some coastal communities have begun aggressive campaigns against the signs — by robocalling the advertisers’ phone numbers.

“It’s the only crime I know of where a person deliberately leaves their phone number behind,” said Mayor Peter Bober of Hollywood, which uses computer software to call the phone numbers, up to 20 times per day, until offenders pay a $75 fine. “They want us to call. So let’s call. And keep calling.”

Think of it as fighting one nuisance with another. The advertisements, known as snipe signs, are illegal in many Florida communities on public property like highway medians or telephone poles. But they are also cheap to print and hard to eradicate.

After years of removing the signs by hand, officials in Hollywood, Oakland Park and St. Johns County recently turned to robocalling. Other cities say they are considering the option.

“If everywhere you see these rickety-rockety, hodgepodge signs, the impression is not ‘This is a place people will want to visit,’ ” said Mayor Anne E. Sallee of Oakland Park. “Instead of the attractive landscapes that people expect in Florida, you just see these signs, helter-skelter, lying there like a pile of beer cans.”

The technology is simple. Police officers enter the offenders’ phone numbers into computer programs that generate automated messages advising the recipient to come to the police station. The pestering does not stop until the advertiser turns in the signs and, in some cases, pays a fine. The software costs $300.

Cities say they are worried that the flashy signs for “Cheap Houses” and “Bankruptcy Relief” will remind tourists of the slow economy, especially in Florida, which has the nation’s highest foreclosure rate.

The Hollywood police used to spend hours each week gathering the signs by hand. In 2009, Mr. Bober held a contest to award $500 to the person who picked up the most (the winner collected nearly 500 that day), and the signs disappeared. But they returned almost as quickly.

Since the robocalls began in March, the number of signs in Hollywood has fallen by an estimated 80 percent, city officials say. So far, the city has called more than 100 phone numbers, issued eight citations and gathered hundreds of signs.

Advertisers, of course, are annoyed. Many have complained that the tactics are excessive and antibusiness. One, Catherine Regal, a 65-year-old real estate agent, says she markets homes in newspapers, online and on “For Sale” signs stapled to telephone poles around the neighborhood. “The signs are so effective, you wouldn’t believe,” she said.

In March, she began to receive automated calls from the police. At first, she ignored them, but they came every hour. “It’s absurd,” she said. She is especially vexed that politicians are allowed to print and post such signs, even though it is for limited periods of time and with city permission. “Why can the city put up signs but we can’t?”

The California-based company that makes the robocalling software, Voicent, has sold it to more than 1,000 cities in the United States and Canada, said its marketing director, Jerry Scharf. Most cities use it to send weather alerts to schools or emergency transit alerts to travelers. Many political campaigns also use the software.

But some cities have expressed caution about the technology. The City of Leesburg, Fla., has struggled with snipe signs, but officials worry that robocalls would send the wrong message, said Robert Sargent, a city spokesman. “It would have been a little too much like we were harassing people,” he said.