The University of California has admitted more Hispanics than whites for the first time, reflecting demographic shifts in the country’s largest state. The state university system also admitted more students from other states and abroad, who pay higher tuition, a national trend at state universities. 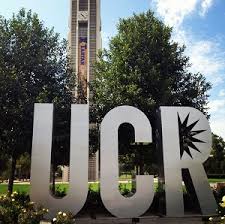 Latinos account for 28.8% of the 61,120 Californians admitted for this fall’s freshman class at the UC system’s nine undergraduate campuses, up from 27.6% last year and topping the 26.8% share of whites, preliminary data show.

Both trail the 36.2% share for Asians, the largest freshman group for the past few years. Blacks represented 4.2% of those admitted, the same as in 2013.

Hispanics represent California’s largest ethnic group. According to the California Department of Finance, among 15- to 19-year-olds in California, 49.4% are Hispanic, 29.2% are white, 10.9% are Asian and 6% are black.

“The freshmen admitted reflect the changing demographics and diversity of the state,” said Dianne Klein, spokeswoman for the UC system.

Los Angeles resident Wessly Hernandez, 17, who plans to study civil engineering, was admitted to UC San Diego, Davis and Irvine, as well as the University of Southern California and Carnegie Mellon University. “My parents didn’t make it to high school so I feel a lot of satisfaction, because this accomplishment is for them as well as for me,” said the son of a cleaning lady and mechanic, both Latino.

California law prohibits public universities from considering race or ethnicity in admissions decisions. But Ms. Klein said the UC system has been striving to attract students from underperforming high schools, which typically have a concentration of under-represented minority and low-income students.

About 43% of those admitted for the fall identified themselves as the first to attend college in their families. “Too often in minority communities there was this perception of the vaunted University of California system as too expensive and out of reach,” she said.

“It’s great that Latinos are being more represented in the UC system, since, after all, they are largest group in California,” said Dowell Myers, a California demographer at USC, a private institution. “It would be really useful to have more representation of African- Americans.”

Meantime, the UC system, like many others, attracted more nonresidents to help bolster its budget. The share of students the UC system admitted from other states climbed 9% from last year, while the number from other countries rose 15%, according to university figures.

The system, which includes the prestigious Berkeley and University of California, Los Angeles campuses, estimates 13% of undergraduates this coming academic year will be non-Californians, up from 12% this year and about 5% four years ago. Tuition for nonresidents is about $35,000 compared with $13,000 for residents. “The revenue they bring is substantial and subsidizes the education of Californians,” Ms. Klein said.

California Polytechnic isn’t part of the University of California system. A previous version of this article incorrectly included a photo of a student wearing a Cal Poly T-shirt.

Write to Miriam Jordan at miriam.jordan@wsj.com