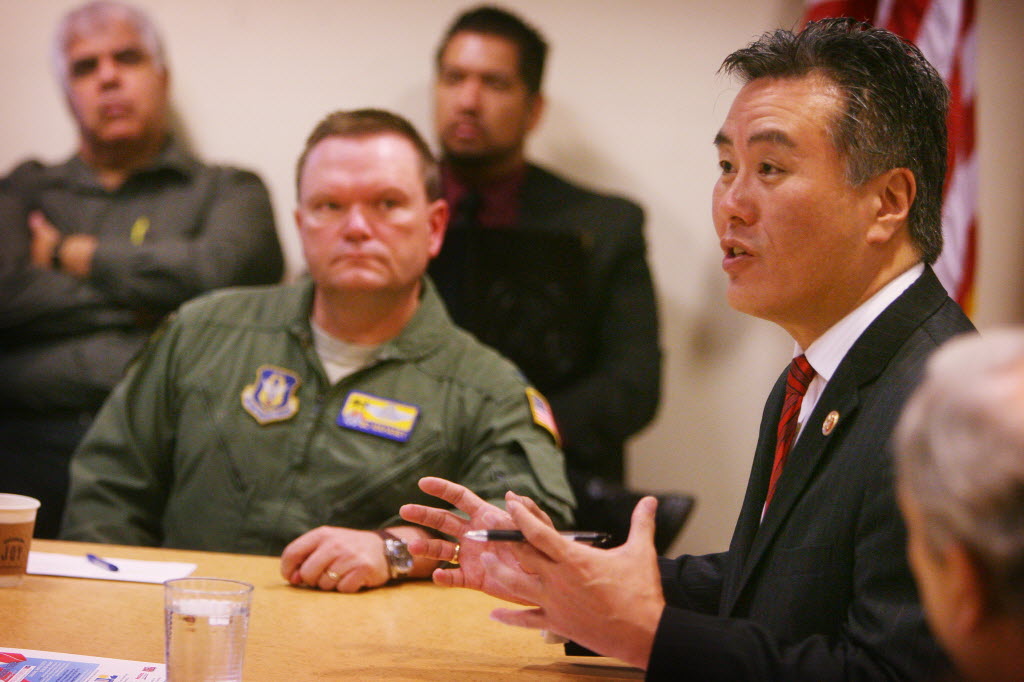 Mark Takano speaks with military officials at March Air Reserve Base in April. Takano recently penned a letter to the FTA to support continued funding for the Perris Valley Line as it fights a legal battle. FILE PHOTO

Rep. Mark Takano (D-Riverside) sent a letter today, June 11, to Peter Rogoff, administrator of the Federal Transit Administration (FTA) asking him to keep funds that were dedicated to the Perris Valley Line available while the Riverside County Transportation Commission deals with litigation.

The FTA granted RCTC $75 million through its Small Starts program to extend a Metrolink line from Downtown Riverside to the southern end of Perris. The litigation has put the project on hold, which means RCTC runs the risk of losing that funding, according to John Standiford, the deputy executive director.

You can get details on the project in this story.

Here is the letter from Takano.

The Perris Valley Line Metrolink Extension represents a significant step towards sustainable living in California’s 41st Congressional District and I welcome the $75 million federal investment that has been appropriated by Congress for this project.

As you may know, a California Superior Court Judge recently ordered decertification of the Perris Valley Line’s environmental impact report (EIR) prepared under the California Environmental Quality Act (CEQA).  The project’s sponsor, the Riverside County Transportation Commission (RCTC), has assured me that they are pursuing all options available to ensure that the Perris Valley Line ultimately moves forward to construction.

Perris Valley Line provides critical regional connectivity to my constituents, particularly in the underserved cities of Perris and Moreno Valley, while connecting major job centers in Riverside and March Air Reserve Base.

Thank you for FTA’s continued support of Perris Valley Line and for working with RCTC to advance livability and mobility in California’s 41st Congressional District.