The trains have lived up to expectations. Property values have risen, stores have opened, and ridership in the area has nearly tripled since the year after the service began. But there also are signs that rising housing costs near rail stops are starting to push out lower-income residents. 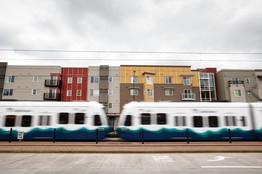 Seattle’s light-rail system has pushed up rents in some neighborhoods, pricing out some longtime residents.

Now, Seattle and other cities are trying to find ways to foster affordable housing near train stations. In the past couple of years, several have organized multimillion-dollar funds to provide low-interest loans to developers seeking to buy or build affordable housing near the stops. These cities, having spent billions to build light-rail systems, are loath to see those systems price out the residents who are most likely to use public transportation.

In cities with established rail systems, such as Washington, D.C., and San Francisco, developers mostly have used these new loans to buy apartment complexes near the stops. In other cities with newer, expanding rail systems, such as Seattle and Denver, loans are used more often by developers to buy land on which to build affordable housing. The loan programs typically define affordable housing as rents that can be paid by residents earning anywhere from 30% to 80% of the area’s median income.

Seattle last year assembled $7 million from federal grants, a city property-tax levy and nonprofit local lending groups to fund low-interest loans for the development of as many as 200 apartments by 2015 at any of six rail stops in and near Rainier Valley. The city, which is taking applications from borrowers through the end of this month, anticipates most bidders likely will be nonprofit housing developers who use a combination of low-income tax credits and low-interest loans. 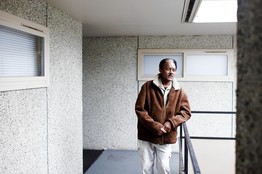 “The funds make a small dent in the need,” said Melinda Pollack, a vice president at nonprofit Enterprise Community Partners, which helped start such affordable-housing funds in several cities. “Without them, you may have absolutely no affordable housing near transit.”

Professors at Northeastern University in Boston examined 42 neighborhoods in 12 U.S. cities in 2010 and found that housing costs near rail stops increased after light-rail service started in many markets. “A new transit station can set in motion a cycle of unintended consequences in which core transit users…are priced out in favor of higher-income, car-owning residents,” the authors wrote.

Not everyone agrees that lower-income residents are losing out. Roger Valdez, a nonprofit housing developer in Seattle who blogs about land use and planning there, noted that the Link rail system provides Rainier Valley residents low-cost transportation to jobs and schools in other communities. While it increases housing costs, it also lowers transportation costs for residents near rail stops, he said. And it brings more shoppers, residents and stores to the area.

“The people who are struggling are going to pay more rent, but they’re going to make more money,” Mr. Valdez said. “And their other costs will go down.” 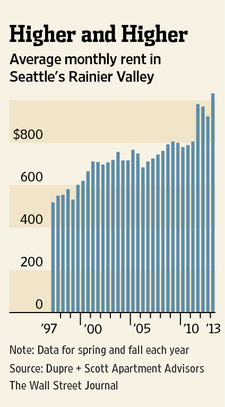 Others think the affordable-housing funds compound what they say is an inefficient form of transportation. “The way that you get affordable housing is by stopping the government policies that make it unaffordable in the first place,” said Wendell Cox, a demographer and urban-policy consultant in Illinois.

Rainier Valley, a racially mixed neighborhood of low-slung homes and strip malls southeast of downtown Seattle, had a median per-capita income roughly 40% below the citywide median from 2007 to 2011, census figures show. But the announcement of the rail-line route, in 1999, and its launch 10 years later boosted rents in the area. A report by the Puget Sound Regional Council shows assessed values for certain parcels around one Rainier Valley station rose by an average of 513% since 1999.

Two new apartment complexes have now been built near rail stops—the neighborhood’s first private development of market-rate apartments in roughly 40 years—one of which includes a coffee house, a teriyaki restaurant and a Mexican eatery. These new buildings have helped push the average monthly rent in Rainier Valley to roughly $1,000 this year from $700 in 2008 for complexes of 20 units or more, according to Dupre + Scott Apartment Advisors.

That has priced out the likes of Rommy Gibson, who earns about $33,000 a year. He said he left his one-bedroom apartment near the nursing home where he has worked since 1985 because his $750 rent was scheduled to rise. His landlord, Carl Haglund, began renovating a 23-unit apartment building last year near a rail stop, renamed it the Link and raised rents by roughly 40%. Mr. Haglund found Mr. Gibson an apartment at another building 40 blocks away, where he pays $700 a month and rides a bus to work.

Meanwhile, new tenants at the Link include Boeing BA -0.48% technician Nick Greenaway and his wife, who own three cars. They rented a refurbished one-bedroom apartment in March for $1,045 a month, which he said “turned out to be a real bargain.”

Write to Kris Hudson at kris.hudson@wsj.com

A version of this article appeared June 11, 2013, on page A4 in the U.S. edition of The Wall Street Journal, with the headline: Rail Lines Bring Housing Clashes.