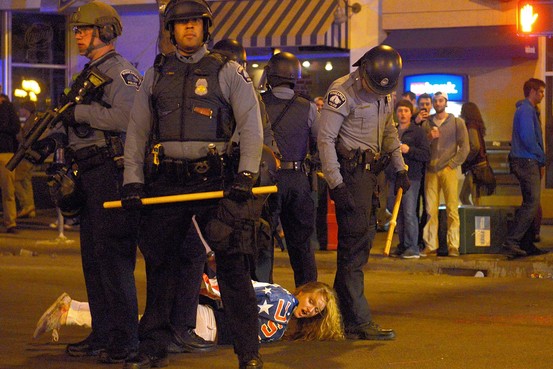 Police stand over a women who was detained during a raucous celebration by University of Minnesota hockey fans that resulted in several arrests earlier this month. Associated Press

At least 10 riots have rocked colleges in the past two months, resulting in hundreds of arrests and dozens of injuries amid a growing sense that social media are helping to fuel misbehavior at student mass gatherings.

Police arrested 19 people near the University of Minnesota’s flagship Twin Cities campus after a recent Gophers hockey loss. At a University of Cincinnati party that drew about 450 students, police had to be summoned when things got out of hand. At an off-campus party at Colorado State University in Fort Collins, Colo., police resorted to pepper-spray projectiles to bring the crowd under control.

Celebratory riots after sports games date back at least 30 years, said Robert Carrothers, a sociologist at Ohio Northern University who has studied the phenomena. But only recently have they started to occur when the home team loses, as happened this year at the University of Minnesota, the University of Kentucky and the University of Arizona.

“This is new as far as I can tell,” Mr. Carrothers said. “It used to be the winners go out and celebrate and the losers go home and sulk, but that’s not true anymore. Now the losers are out there celebrating. We don’t even have a name for this yet.”

Interviews with several police chiefs suggest that the use of Twitter TWTR +2.49% by students as a way to organize, assemble and re-assemble has accelerated the speed and size with which crowds gather.

The popularity of the “selfie” is evident, too, bringing into play a new level of voyeurism among students who want to get a photograph of themselves inside the melee even if they don’t really want to take part in it.

“It used to take a lot more work to generate a gathering,” said Gary Margolis, who manages the National Center for Campus Public Safety. “Now one tweet and you’ve just reached 40 people. Everyone has their own mass communications device in their pocket.”

Authorities on some campuses are taking a harder line with student gatherings to head off problems before they start, and in some cases are sending out warning emails in advance.

In Ames, Iowa, Steven Leath, president of Iowa State University, ended an annual week-long celebration, known as Veishea, two weeks ago after a crowd of a few thousand people—mostly students—threw bottles at police and tore down stop signs and light poles on a weeknight. One student was severely hurt when a light pole fell on him.

Mr. Carrothers chalks some of the new behavior up to expectations generated by media. Crowds emulate each other. The behavior reinforces itself. Expectations to act a certain way amplify. “People have a pretty good idea of what they’re supposed to do,” he said. “You go out in the street, you turn things over, you take selfies.”

University officials in Ames are trying to figure out how to handle future celebrations, especially given that social media allow unplanned events to “escalate before you can really deal with it,” Mr. Leath said. “We went from about 300 students at 11 p.m. to 1,000 students in 11 minutes via social media.”

Many incidents around the country this spring started with a planned party or a high-profile sports competition. Crowds gathered, alcohol was almost always involved and police then showed up to keep order. Often the confrontation starts with taunts toward police or destruction of public property, police say. Informed by Twitter messages and word of mouth, crowds disperse and reform quickly ahead of police.

At this year’s March Blarney Blowout the University of Massachusetts in Amherst, more than 50 people were arrested on charges ranging from failure to disperse from a riot to liquor-law violations to disorderly conduct, burglary and assault. Of the total, 21 were students at the Amherst school. 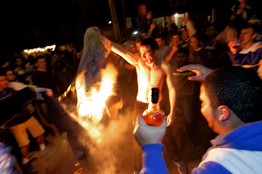 University of Kentucky fans and students took to the streets after the University of Connecticut defeated Kentucky in the NCAA Men’s National Basketball Championship in Lexington, Ky., earlier this month. Reuters

The early celebration of St. Patrick’s Day attracted a lot of out-of-towners, according to Ed Blaguszewski, spokesman for the university, noting how easy it is for people to track the festivities via Twitter.

“It just created a momentum that we had not seen before,” he said. “Twitter is much more of a broadcast medium than Facebook.”

Mike Schmit, student body president at University of Minnesota Twin Cities, used Twitter to keep tabs on the rabble-rousing of his classmates. The 21-year-old junior described the events at a popular district known as Dinkytown as “pretty embarrassing.”

“It’s kind of like watching a herd of sheep or something,” he said. “They are all standing around taking pictures and then as soon as police advance, they all run in the opposite direction en masse.”

The online postings can prove helpful to police, who use them to gather information—by searching social-media sites with key-word searches—and later make arrests.

At Iowa State, based on evidence found in social-media postings, police arrested four students on felony charges several days after a riot.

“This is a big undertaking,” said Cmdr. Geoff Huff, spokesman for the Ames Police Department. “The mound of images and videos is enormous.”

It’s unclear if the damage done to a nearly century-old traditional known as Veisha at the school is irreparable.

“The landscape has changed, and so we’re going to have to change,” said Mr. Leath. “The verdict is out on whether or not we can do Veishea again and do it safely.”

Write to Caroline Porter at caroline.porter@wsj.com and Douglas Belkin at doug.belkin@wsj.com