With UC Riverside enrollment at nearly 21,000 students and on-campus housing at 6,045 beds, it’s not hard to see why some students are renting single-family homes in nearby neighborhoods.

But homeowners who live near rental houses say not all students make good neighbors, and are calling on the university to help address problems with parking, trash, late-night noise, crowded parties and public urination.

Some neighbors want the school to house more students itself, teach them appropriate behavior and discipline students for off-campus rule-breaking.

“I just want to live my life, not manage other people’s children,” resident Judy Conn said in a June interview.

UCR officials say they understand the concerns, and though there are limits on what they can do, they’re working on a new, more aggressive strategy in time for the new school year, which begins in September.

UCR now houses a little less than 30 percent of its students on campus and aims to increase that to 50 percent, Assistant Vice Chancellor Andy Plumley said. The second phase of Glen Mor, on-campus apartments, will add about 800 beds in 2014, and many private apartments near campus rent almost exclusively to students and have room, he said. 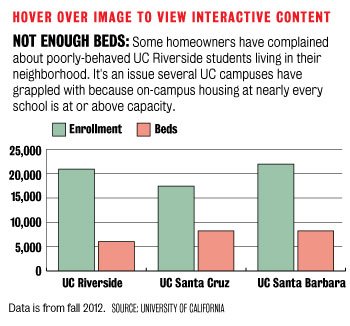 “They’re not going into the neighborhoods because they can’t find housing,” Plumley said. “Sometimes when they move off campus it’s because they don’t necessarily like rules.”

Some students concede that more freedom may be one reason to leave dorms, but there are other inducements.

Sharing a house can be cheaper than a dorm room or an off-campus apartment, said Chris Salvador, a 21-year-old recent UCR graduate.

Salvador said he got few neighbor complaints while living off campus. But some residents seem so fed up with students that if anything minor happens, “they’ll call the cops and get you a ticket if your tire’s a foot on the red (curb).”

Students may also have to deal with the university’s student conduct process if they misbehave off campus, said Jeff Kraus, UCR’s director of local government and community relations.

Although the most common discipline cases are about academic dishonesty — such as cheating and plagiarism — cases involving neighborhood issues are on the rise, according to UCR spokeswoman Kris Lovekin. Over the past three years, the number of such cases referred to the university grew from 26 to 38, with 27 cases ending in sanctions in 2012-13.

When misconduct occurs, a student could get a warning, suspended or kicked out of school. The university can block students from getting transcripts or diplomas if they fail to comply with the discipline process.

UCR’s ability to censure students for off-campus actions has limits. Students don’t always tell the school where they live, officials said, so administrators may not know students are responsible for problems at a particular address.

Some homeowner complaints are about code enforcement, noise and things over which the university has no jurisdiction, so unless there’s a trail of citations and reports, UCR may not be able to act, Lovekin said.

To some homeowners, UCR may be part of the problem. Resident Kevin Dawson said when the school puts on the Heat music festival and other such events, “It sends the wrong message to the students that are attending these events that loud outside parties are acceptable.”

Gurumantra Khalsa, who represents the area on the city’s “neighborhood partnership” board, said some homeowners thought UCR’s most recent long-term plan didn’t address student housing needs and concluded the school wants to steer students to homes in their neighborhood.

UCR officials said they want to offer more housing on-campus, but the school’s future growth — including the new public policy and medical schools — will target graduate students, who tend to be more studious.

Plumley said UCR’s housing department relies on its own income rather than state funding, so to get approval to build something, “I have to be able to prove I can fill it.”

The university hasn’t publicly presented its strategy to address neighbors’ concerns, but officials say it will be more immediate than building dorms.

Kraus said the strategy will include telling students what’s expected and the consequences of misbehavior, improving how they handle school-sponsored events, and listening to and working with homeowners and the city.

Cooperation has worked elsewhere. Deborah Elston and other residents formed Santa Cruz Neighbors about seven years ago because of problems with UC Santa Cruz students.

They got an “unruly gathering” ordinance passed that allows the city to recover the cost of police response and fine tenants and landlords for problem parties, and the police put addresses of violators on an online list.

Homeowners also worked with the university to let students know about the dangers of drinking and what can happen if they break city or school rules.

Since the ordinance passed, “I can pick up the phone and call the chancellor if I need to,” Elston said.

Though he doesn’t think homeowners should be surprised that there’s a little noise from a large university, Saldana said students and homeowners each should be willing to give a little.

UCR may get tougher on students who misbehave off campus, and the city has said it’s already stepping up enforcement.

That’s fine with Stasean Washington, a 19-year-old student who lived in a dorm last year and said students need to be respectful of their neighbors.

“If (students) do decide to party and what not, they should be responsible enough to deal with the consequences.”