This update from Jeff Kraus: 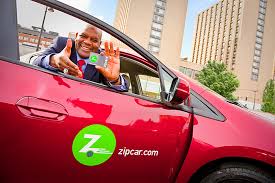 This is probably more information than some of you on the email list wanted to know, but I was able to do some research on the Zip Cars at UCR yesterday.

For those of you that don’t know, Zip Cars  is a “car sharing” company that places cars in busy locations throughout the country that registered users can “borrow” by the hour for short trips for a set fee, potentially eliminating the need for an individually owned auto. At UCR, the rate is approximately $7.00 per hour during the week and $9.00 per hour on the weekend.

Here’s what I found out from out Transportation and Parking Services Department (TAPS):

The Zip Car Program began in February, 2010 at UCR.

There are 4 Zip Cars on campus during the academic year, 2 in the summer (they relocate vehicles to vacation oriented spots in the summer, such as near the coast). There are two cars near Pentland and other student housing facilities, one at Bannockburn, and one in Lot 2 near Hinderaker Hall. The number of cars is determined by Zip, not us. We provide the strategic placed parking locations free of charge to them.

The program is marketed by UCR to the students, particularly incoming freshmen and students living in campus housing through brochures, flyers, posters, etc. Zip does additional marketing, including the use of “street teams” on campus and booths near the bell tower.

There are currently 851 registered users on campus, mostly students. This is increasing by about 5 a week. In March, 99 individual users used the cars 241 times at an average of 2.5 hours each use and 14,144 miles.

In addition to students, because Zip Cars are more prevalent in Northern California, out of town visitors to campus for business often use the cars as well.

Zip Car reports that their UCR venture is profitable to them.

Because TAPS is committed to alternative and more efficient modes of transportation, they said that if asked, they would provide additional parking spaces for Zip Car to increase the number of cars on campus.