BNSF Railway Co., one of the biggest U.S. consumers of diesel fuel, plans this year to test using natural gas to power its locomotives instead. 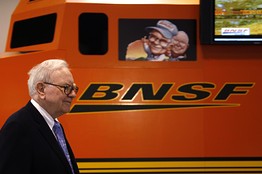 U.S. natural-gas production will accelerate over the next three decades, new research indicates, providing the strongest evidence yet that the energy boom remaking America will last for a generation.
If successful, the experiment could weaken oil’s dominance as a transportation fuel and provide a new outlet for the glut of cheap natural gas in North America.

The surplus, spurred by new technologies that unlock the fuel from underground rock formations, has sent natural-gas prices plummeting. That has prompted industries from electric utilities to tugboat operators to switch to gas. If freight rail joins the parade, it would usher in one of the most sweeping changes to the railroad industry in decades.

“This could be a transformational event for our railroad,” BNSF Chief Executive Matt Rose said of the plan, which hasn’t been publicly announced. Shifting to natural gas would “rank right up there” with the industry’s historic transition away from steam engines last century, he said.

BNSF, a subsidiary of Berkshire Hathaway, considered using gas-powered locomotives in the late 1980s, but shelved the plans when natural-gas prices rose. 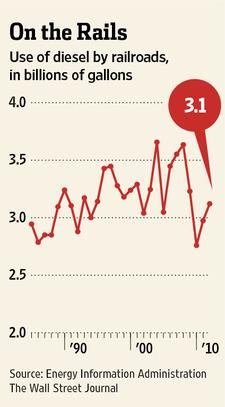 Freight railroads overwhelmingly are powered by diesel fuel refined from crude oil. BNSF, the largest railroad in the U.S., estimates it is the second-biggest user of diesel in the country, after the U.S. Navy.

A potential shift to gas faces many hurdles, however, including getting approval from federal regulators on fuel-tank safety. Introducing gas also will require different fuel depots, special tanker cars to carry the fuel and training for depot workers.

That won’t come cheaply. Just retrofitting a diesel locomotive and adding the tanker car could add 50% to a locomotive’s roughly $2 million price tag, though that increase would diminish as economies of scale take hold.

Mr. Rose said his company nevertheless would quickly move to a “retrofit of existing road locomotives” if the pilot locomotives prove reliable. The pilot trains are expected to get rolling this fall in the hopes retrofitting could begin about a year later.

This time may well be different. A gallon of diesel fuel cost an average of $3.97 last year, according to federal statistics. The equivalent amount of energy in natural gas cost 48 cents at industrial prices.

That gap doesn’t accurately reflect the potential savings since the railroad will have to pay to cool natural gas into a dense, energy-packed liquid. BNSF also faces sizable upfront costs, which it declined to disclose, to retrofit even a portion of its roughly 6,900 existing locomotives. Still, experts believe that natural gas has the potential to be significantly less expensive than diesel for years to come.

BNSF is working with manufacturers to develop a locomotive that can run on diesel and gas, which Mr. Rose said could lower fuel costs and help meet federal air-pollution standards that take effect in two years.

The new locomotives, which use liquefied natural gas, are being developed by units of General Electric Co. GE -0.19% and Caterpillar Inc. CAT -2.04% Mr. Rose said preliminary tests indicated that LNG-powered trains could go farther before refueling than diesel trains and have comparable towing power.

The BNSF move is the latest step by companies and industries to use more natural gas, a fuel that is efficient, domestically produced and cleaner than alternatives. There growing supply of natural gas in North America has made it significantly less expensive than crude oil for each unit of energy delivered.

Electric utilities, which years ago essentially abandoned burning oil in favor of coal, have started shifting to gas-fired power plants. Chemical, steel and fertilizer makers are planning new facilities in the U.S. to take advantage of low gas prices.

Companies and government agencies increasingly are looking at using gas to power fleet vehicles, such as garbage trucks. And gas is making inroads in marine vessels. Wärtsilä WRT1V.HE +1.32% Oyj last year signed contracts to send China the world’s first tugboats operating on diesel-LNG engines. Last December the Finnish company was selected to provide a similar engine for a ferry across the St. Lawrence River in Quebec.

Like municipal bus fleets, which have converted to engines running on compressed natural gas in Los Angeles and other U.S. cities, trains are easier to fuel than other modes of transportation because they repeatedly travel on fixed routes. That makes it less cumbersome to build enough fueling depots. Compressed natural gas is similar to LNG, but requires a different fuel tank and engine.

Natural gas faces higher obstacles to penetrate the nation’s biggest diesel-fuel market: long-distance trucks. They are by far the largest consumers of diesel in the U.S. and there has been considerable interest in converting them to run on natural gas. But truck routes can vary and finding enough refueling stations has been a problem.

Royal Dutch Shell RDSB.LN -0.04% PLC on Monday said it was completing plans to produce liquefied natural gas in Louisiana and Ontario and supply it to as many as 200 truck stops in the U.S., adding to a small, but growing, network of natural-gas fueling stations. A Shell executive said he believed more LNG production facilities will be built in North America as demand grows 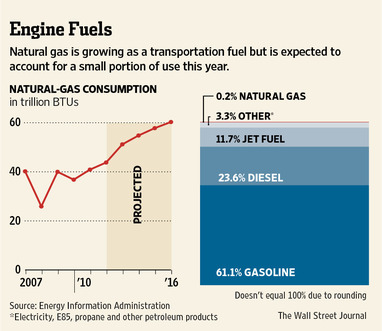 Canadian National Railway Co. CNR.T +0.75% in September retrofitted two locomotives to run on a mixture of 90% LNG and 10% diesel. A spokesman for the company, the largest railroad in Canada, said there would be “mechanical and fuel logistics challenges” with widespread conversion and that it was too early to determine if the pilot program was successful.

The dual-fuel technology “is not a slam dunk,” said Lorenzo Simonelli, the president of GE’s transportation business. But “we are working with BNSF as well as other [large railroads] to provide them the pilots and then start working towards a full production of locomotives and retrofits.”

Change historically has come slowly to the railroad industry.

But there are compelling reasons for railroads to ponder the switch, including new Environmental Protection Agency air-pollution standards for railroads that will likely require railroads to add expensive emissions-control equipment to new diesel locomotives in 2015.

“The overriding incentive is the low price of the fuel,” said Raj Sekar, manager of engines and emissions research at Argonne National Laboratory. He said it would likely take at least five years for gas-powered locomotives to be a significance presence on the rails.

While  railroads consume only 6% of diesel burned in the U.S., according to the federal government, some experts believe BNSF’s decision to try using gas could have a large psychological impact on energy markets.

“This is the kind of change that gets people thinking,” said Kevin Book, an energy-industry consultant. “It will answer the question that everyone is wondering: Is there a future for LNG transportation for freight hauling?”

—Tom Fowler
contributed to this article.

Write to Russell Gold at russell.gold@wsj.com

BNSF has about 6,900 locomotives. An earlier version of this article incorrectly said 6,9000.