In a study, homes with “street trees,” those planted between the sidewalk and street, sold for $7,130 more, on average, than homes without street trees. 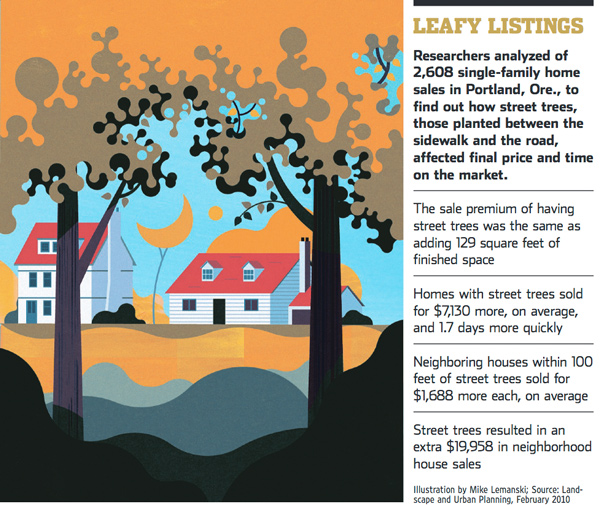 Maybe money grows on trees after all.

In an analysis of 2,608 real-estate transactions over 10 months, researchers found that homes with “street trees,” those planted between the sidewalk and street, sold for $7,130 more, on average, than homes without street trees.

What’s more, homes with street trees sold 1.7 days more quickly than homes without street trees, says Geoffrey Donovan, an economist at the U.S. Forest Service’s Pacific Northwest Research Station in Portland, Ore. Neighbors can reap the benefits as well. Homeowners who live within 100 feet of street trees enjoy a sale premium of $1,688, on average, even though the trees aren’t on their property.

Taken all together, street trees resulted in an extra $19,958 in neighborhood house sales, Mr. Donovan says. 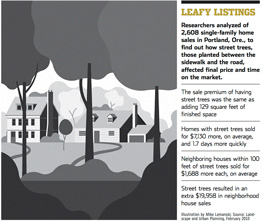 Mr. Donovan and economist David Butry of the National Institute of Standards and Technology analyzed 2,608 single-family home sales in Portland between July 1, 2006, and April 26, 2007. Their team visited the houses in summer 2007 and recorded the number and characteristics of street trees that fronted each property. The study controlled for property characteristics like location and house condition. The researchers then remotely calculated the crown area of trees and the percentage of tree cover on each lot. The study, “Trees in the city: Valuing street trees in Portland, Ore.,” was published in Landscape and Urban Planning in February 2010.

The advantages of trees go well beyond mere aesthetics, Mr. Donovan says. “There’s increasing evidence that there are huge public health consequences of living in a city. Not everyone can live next to Central Park. Trees are a way of modifying this urban environment.” Other research conducted by Mr. Donovan shows that street trees are associated with cleaner air, lower energy use and lower crime.

Michael Vargas, a New York City-based appraiser, says trees are generally a premium in urban environments. In New York City, “most of the prime streets that are tree-lined get a 10% to 15% premium in value over similar streets with less tree architecture,” he says. “It’s a way to make it seem like you’re not in the city.”

But before branching out at home, know the downsides. “Tree ownership, just like owning a property, has costs involved and responsibilities involved,” says Craig Filipacchi, associate broker with Brown Harris Stevens in New York City. “Vehicles spreading salt can kill the tree; trucks can bump into them and damage the bark; trees can get infected. When it’s on your property, it’s definitely something you have to take care of.”

According to a new study from Temple University, well maintained green spaces can decrease urban crime: Temple professor Jeremy Mennis found that areas of Philadelphia with more greenery experienced lower crime rates. The study explains that this is because of “the calming impact that vegetated landscapes may impart, thus reducing psychological precursors to violent acts.” [Phys.org]